Made in the USA

This issue is NOT a fault in the diverter valve provided by your company. This issue concerns how rubber washers interact with the shower pipes of customers in the USA. Here is detailed explanation:

Our shower filter normally sits on the wall of a customer's bathroom as shown in the following image:

The following image shows the washer between the diverter valve (made by your company) and the shower pipe (normally installed on customer's wall): 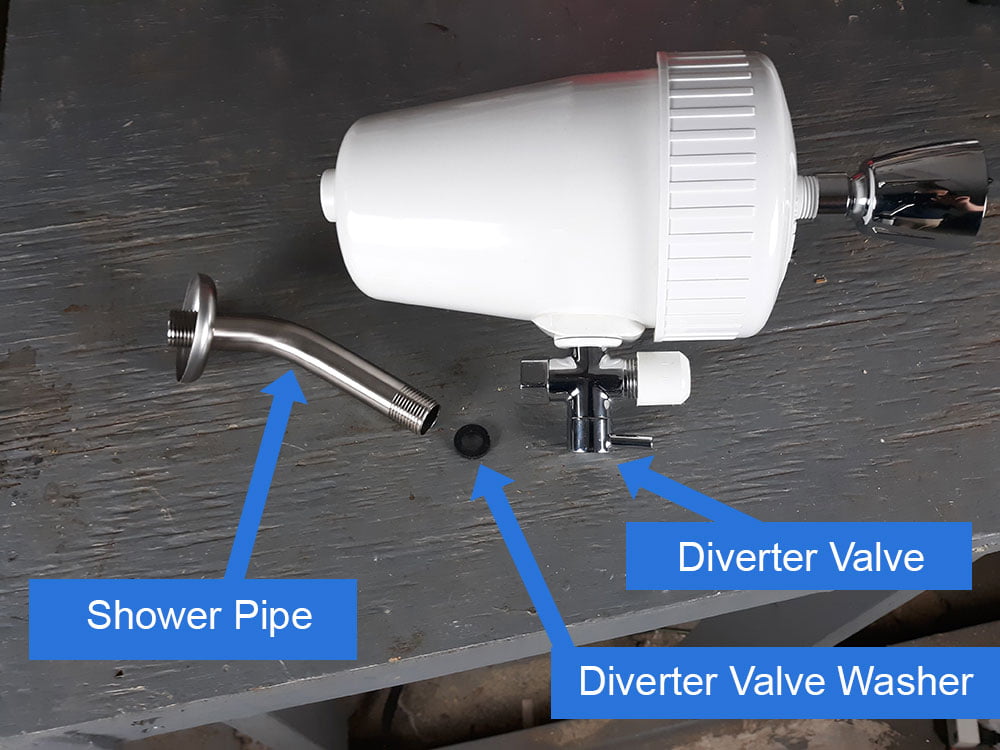 Here is a close up version of the pipe, the washer, and the diverter valve: 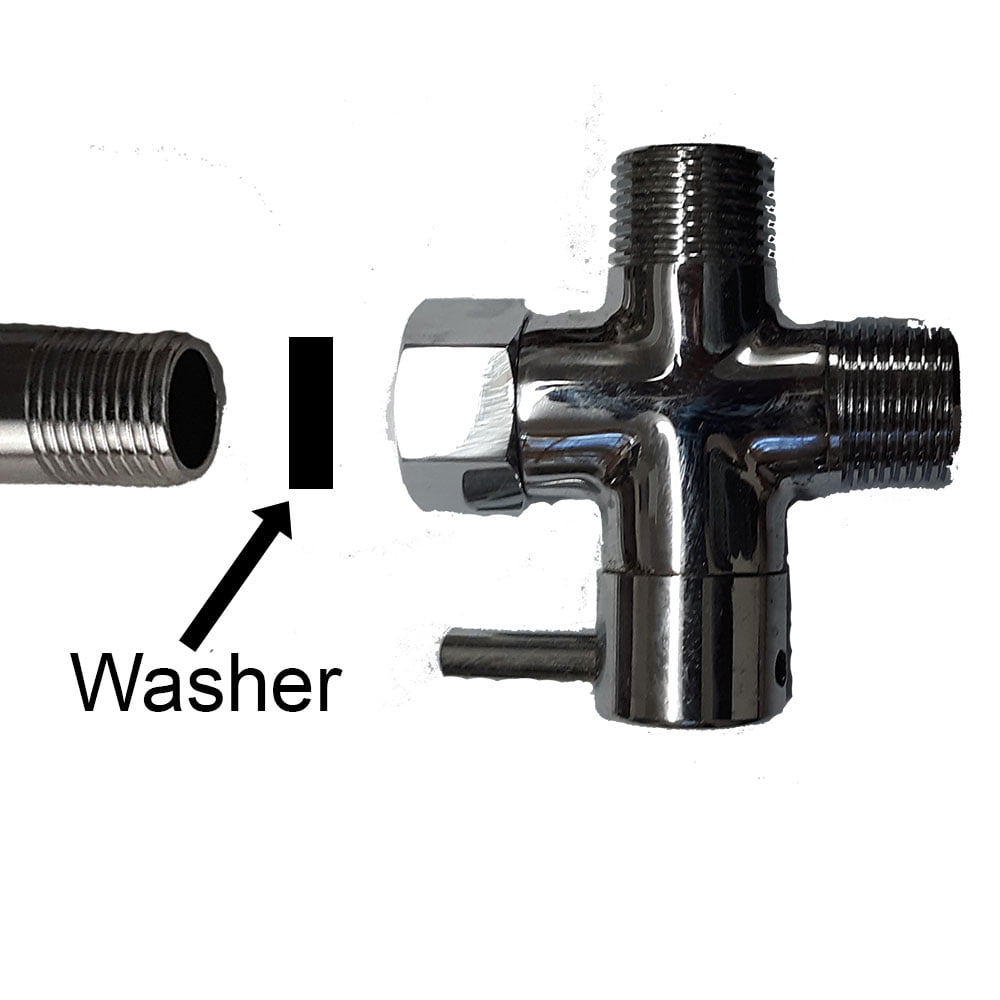 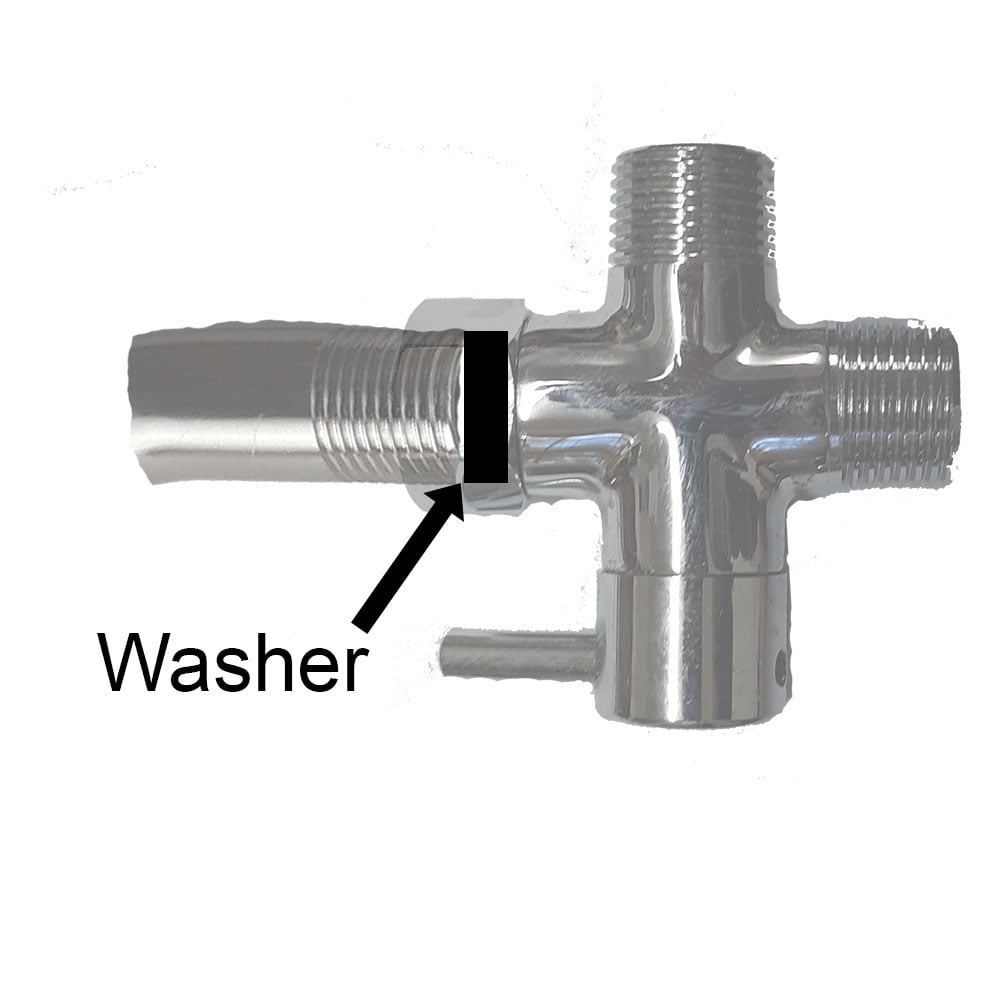 But, when we tighten the diverter valve onto many of the pipes in customer's homes, the washer is slipping inside of the shower pipe (as shown below): 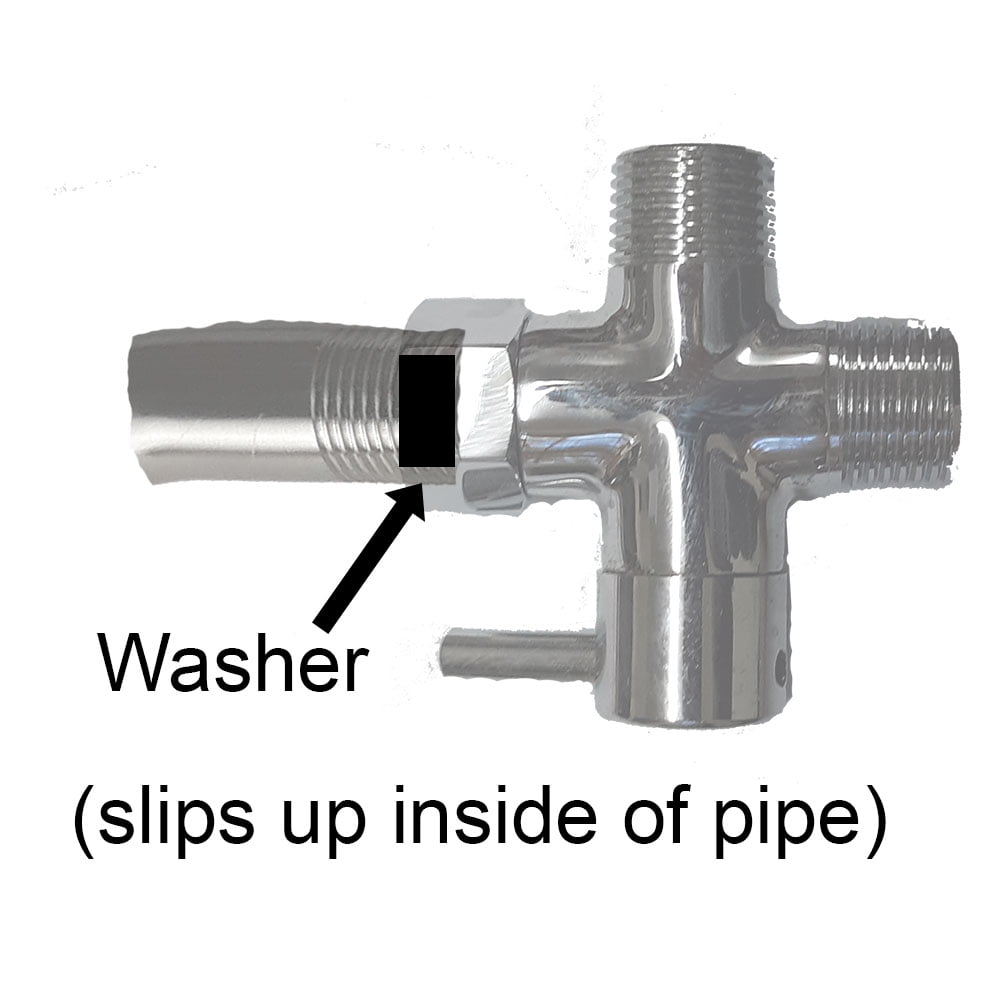 This is a big issue. When the washer slips up inside of pipe, the diverter valve/shower pipe connection starts to leak. Also, our shower filter depends on the washer as a "brake" to hold the shower filter upright as shown here:

When the washer slips up inside of the shower pipe, this "brake" that we need no longer exists. This results in our shower filter flipping upside down (in customer's home) as shown here: 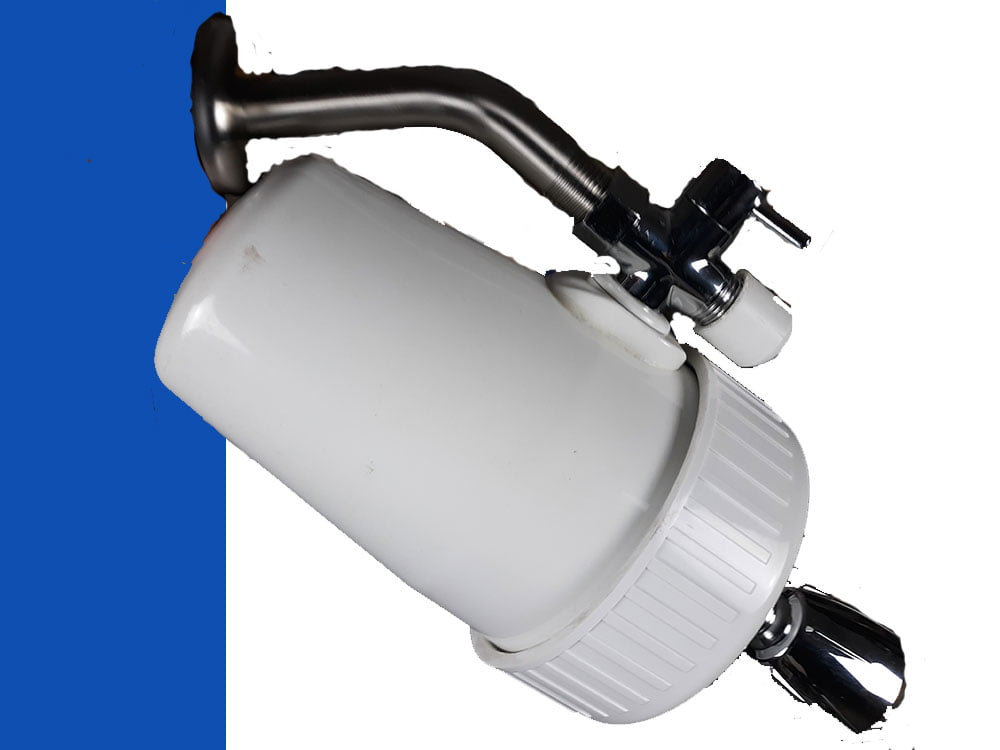 Of course, we cannot have this happen in our customer's homes. They will demand refunds and someone could possible become injured.

Years ago, this was not an issue for us. It is now an issue because of the way many shower pipes are now made/sold in the USA. The pipe walls of shower pipes where once thicker (see "A" below). Now they are often much thinner (see "B" below). Many of the shower pipe wall are so thin that the end of the pipe (which contacts washer) is sharp like a knife. 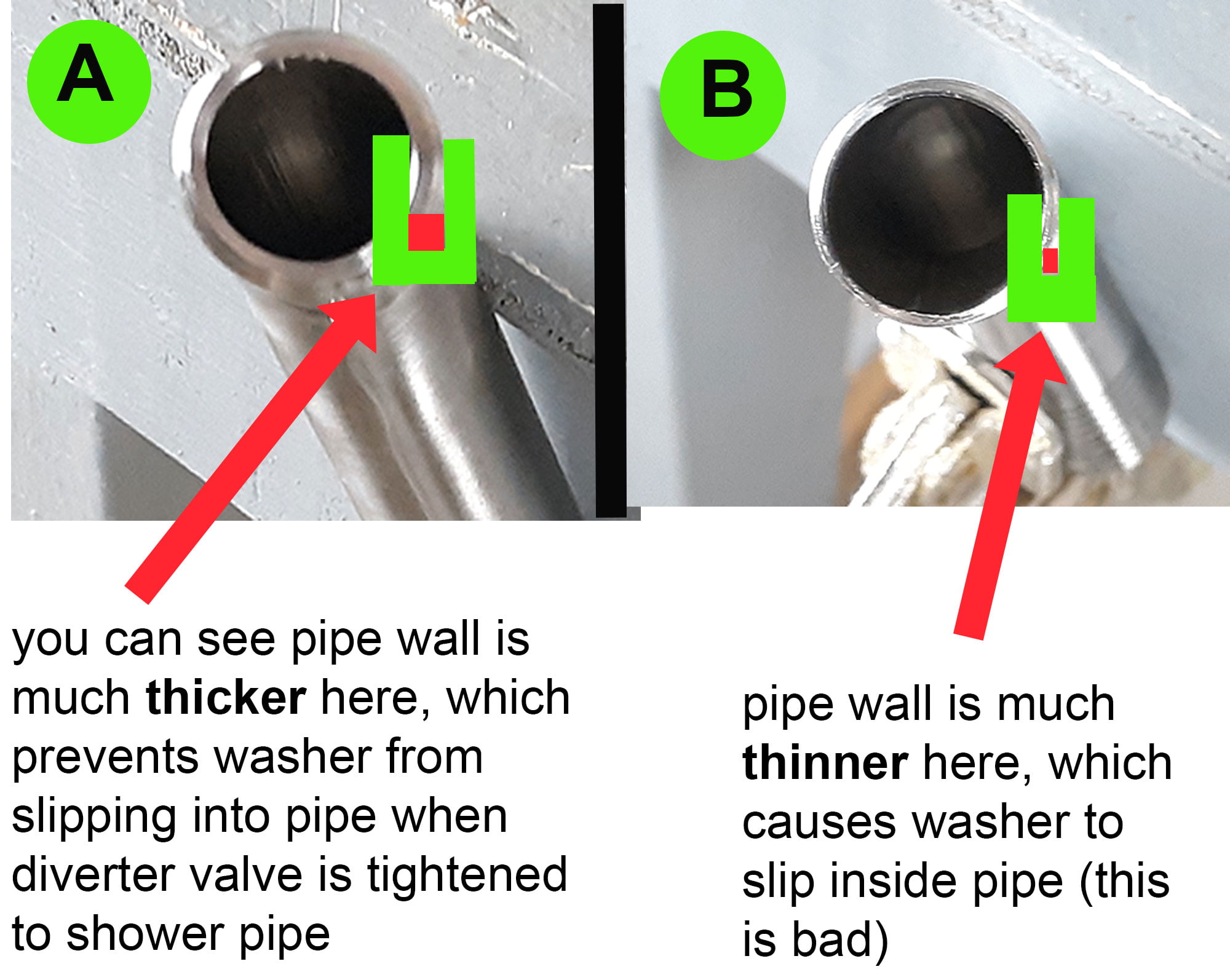 When shower pipes are too thin, when we tighter shower pipe to diverter valve, this causes rubber washer to slip inside pipe instead of the washer staying on outside end of pipe (as indicated before). Again: this causes shower filter to slip upside down on pipe.

Our idea to solve this problem is to provide each customer with a simple shower pipe adapter, similar to the 3d printed prototype we created (see below): 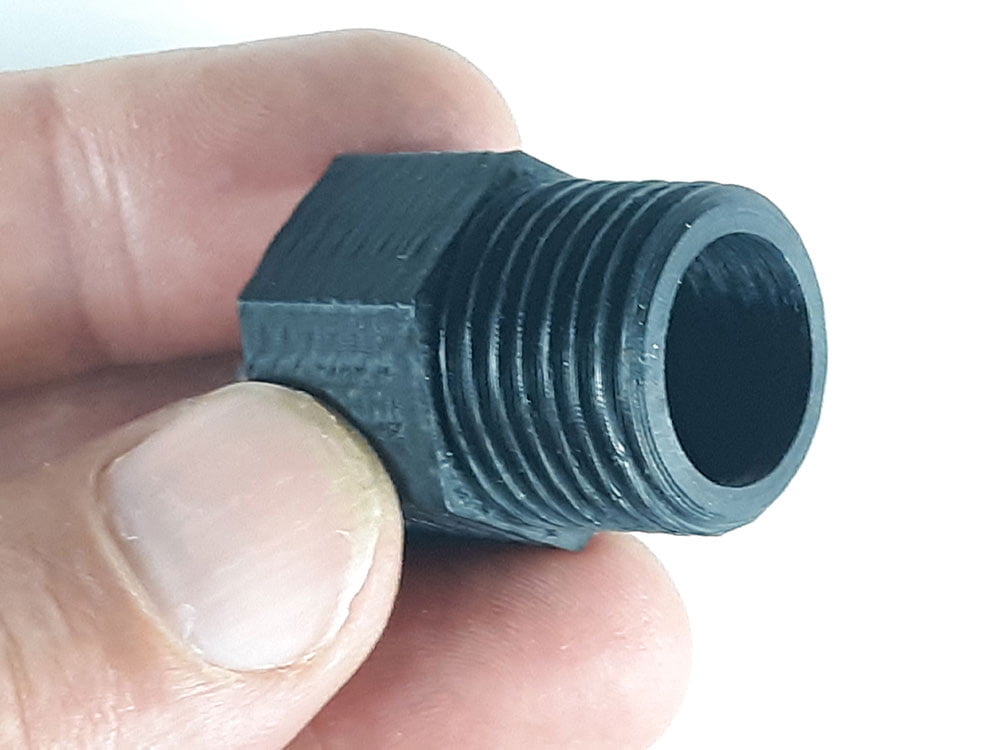 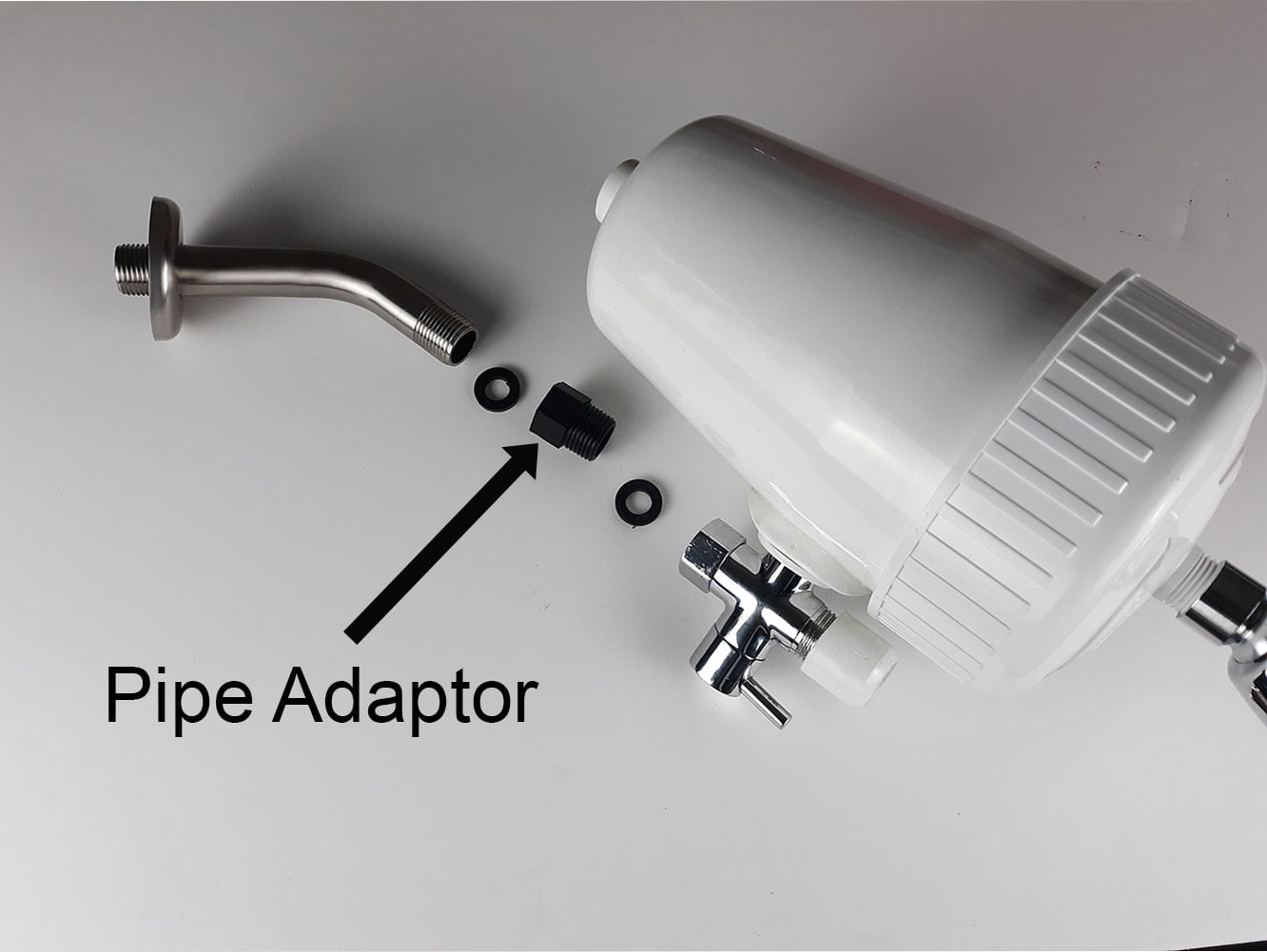 For this pipe adapter to work, we need to have the pipe wall at least 3/16 inches thick and the end of pipe wall needs to be nice and flat. This think and flat surface at the end of pipe should prevent the washer from slipping up inside a pipe: 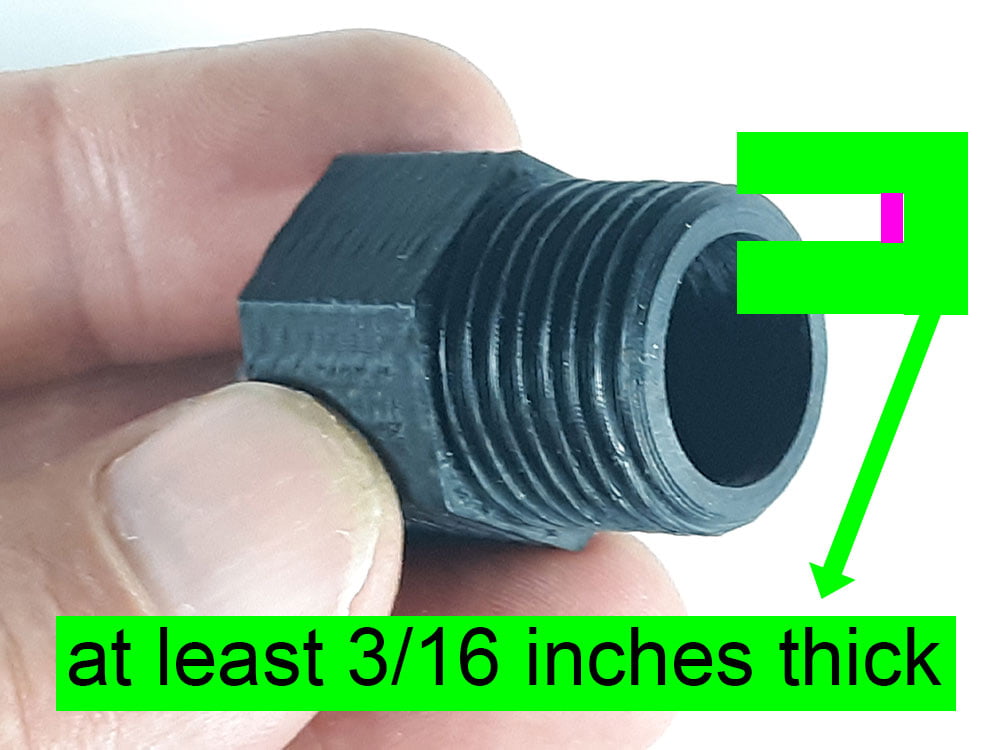 Here is another pipe adapter we printed (abs plastic, printed with 3d printer) 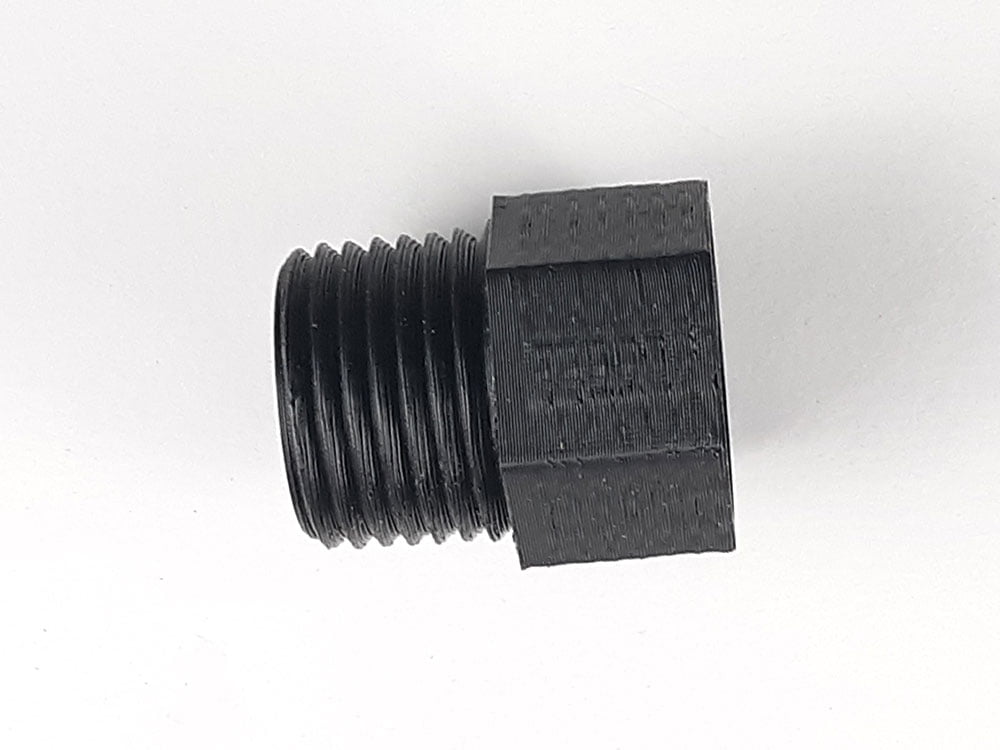 In case you cannot tell from the picture, the adapter needs to be all one piece. One side (with nut) screws onto customer's shower filter. The diverter valve (made by your company) screws onto the male end of adapter.

The whole purpose of this adapter is to create a thicker, more blunt edge against the washer located inside of the diverter valve. This thicker edge on the pipe end allows the diverter valve/washer to be tightened with another force to prevent the shower filter from flipping upside down.

We are able to print these prototypes in abs plastic with our 3d printer. When testing, we discovered the printed adapters will hold a shower filter into place on a shower pipe. But with a little force (pushing, pulling, etc) the printed adapters do break. The hard plastic adapters are simply not strong enough to provide to customers.

We are explaining these details to you in hopes that your company can fabricate an adapter for us out of strong metal. We need an adapter strong enough to to hold the shower filter and withstand a acceptable amount of force (pushing, pulling, etc). Maybe you could just alter the existing pieces of the diverter valve to create such an adapter?

For each diverter valve we purchase from you in the future, we will also purchase an adapter (if you can provide these adapters at a reasonable, fair price).

We cannot market and sell our custom line of shower filters until we are able to obtain such an adapter, or until we figure out some other option.

We would be happy to send you one of our 3d printed prototypes. We can also send you detailed drawings with specifications if needed.

Please let us know your thoughts on this matter.

Thank you and we look forward to hearing from you soon. 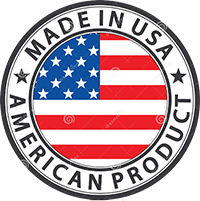 Find us on your favorite social network. Keep in touch for , promotions, giveaways, tips, and updates.